Most people first become aware of bed bug bites several hours after bites are inflicted. A minority of people experience immediate itching and swelling following bed bug bites, and amazingly, some people do not experience symptoms of any kind from bed bug bites, not even itching. Bed bugs do not spread disease to humans, and bed bugs have traditionally been categorized as nuisance insect pests as opposed to insect pests of medical importance. However, entomologists and public health professionals have gradually come to understand that bed bugs can, in fact, have a negative impact on human health.

The majority of people who experience a bed bug infestation within their home sustain bites that eventually become itchy and swollen. This common condition is caused by anticoagulant and vasodilating proteins contained within bed bug saliva. Anticoagulants prevent blood from clotting, which causes wounds to continuously bleed. By injecting anticoagulants into the bloodstream during bites, bed bugs receive a consistent flow of blood during their 5 to 10 minute feeding sessions. The vasodilating proteins in bed bug saliva also contribute to increased bleeding by expanding blood vessels. In addition to these proteins, bed bug saliva also contains proteins that numb the skin, which is why bites are not immediately noticed by victims. For most people who sustain bed bug bites, itchiness and swelling don’t set in until 48 hours following a bite. Luckily, most people who sustain bed bug bites will only experience local symptoms, while a small number of people develop systemic symptoms in response to bed bug bites. These rare systemic symptoms include fever, nausea, chills and anemia.

Although researchers have confirmed that bed bugs can carry some disease-causing organisms, like hepatitis B, no medical experiments or clinical case studies have shown that bed bugs can transmit pathogens to humans. In fact, research has shown that when microbe-rich bed bugs bite immunocompromised individuals, pathogens still fail to be transmitted to the vulnerable human hosts. However, researchers who analyzed the bacteria on the bodies of five bed bugs found two specimens that had been carrying antibiotic-resistant Staph aureus bacteria and antibiotic-resistant enterococci bacteria, but this study has been criticized by fellow researchers. Surprisingly, studies have shown that people who have experienced bed bug infestations are most likely to develop mental health conditions rather than physical health conditions. For example, many people who struggle with bed bugs within their home for an extended period of time develop lasting anxiety, social isolation, insomnia, stigma and persistent crawling sensations on their skin. While most people may fear the physical toll that bed bugs can take on the human body, research shows that the body is far more resilient than the mind when it comes to surviving bed bug infestations.

Have you ever experienced an allergic reaction in response to bed bug bites? 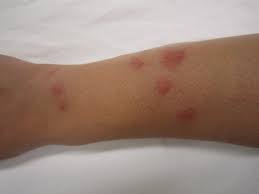