It is important to know what to look for when inspecting for bed bugs. However, the physical traits of a bed bug can easily be mistaken for other insects if you do not fully know the bed bug anatomy.

Bed bugs use antennae as sensors to guide them towards sleeping hosts, where the insect can feed. Each antenna has four segments, approximately half as long as the insect’s body.

The clypeus is one of the sclerites that make up the “face” of an arthropod.

The pronotum is a concave-shaped structure that envelopes the head in a wing-like fashion.

Bed bugs have evolved to be expert travelers. Due in part to six legs which are made to crawl. An adult bed bug can cover four feet in one minute. Each leg is tipped with a claw that can be used to grip rough surfaces, climb, and hold onto a host as they feed. These insects lack suction pads making it difficult for them to climb smooth surfaces.

Bed bugs have heads that are short and broad, which attach to their thorax. ( The thorax is part of the insect where its legs attach to the body. This segment also connects to the head and enables the bed bug to move. )

Wing pads indicate where wings would usually develop as an insect matures. While adult bed bugs have wing pads, they are only vestigial wings. Meaning their wings do not fully develop and they never gain the ability to fly. It is believed bed bugs once had wings but over time evolved to no longer require them.

There are 11 segments which create the structure of a bed bug’s abdomen. As the pest feeds, these segments will expand allowing the blood being consumed to be stored. Immediately after a bed bug has fed, the abdomen will appear swollen and reddish in color.

The shape of a bed bug’s abdomen indicates whether the insect is male or female. Male bed bugs have a pointed tip at the rear of their abdomen, females will have a rounded tip.

Bed Bugs: What NOT to do 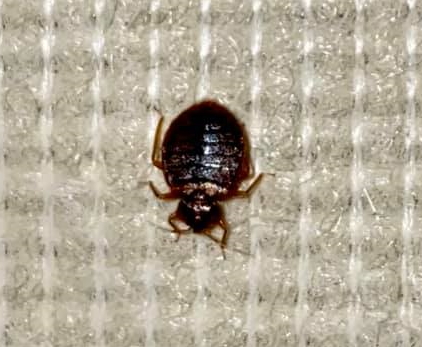 How to Identify Bed Bugs